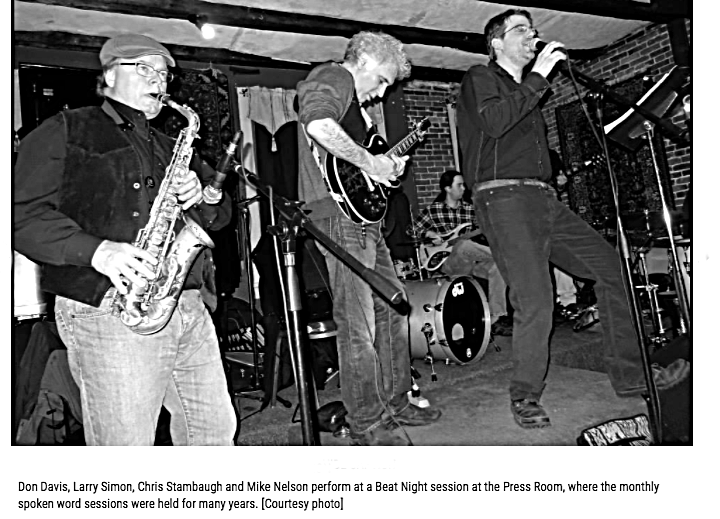 I created Beat Night in 1999 in Portsmouth, NH.  It is a series featuring spoken word and improvised music.  It is now in it’s 20th year.  Most of the time it occurred in the club “The Press Room” on Congress St, in Downtown Portsmouth. “Beat Night” also had a second home, briefly, at The Cornelia St Café in Greenwich Village, NYC The impulse that led me to create “Beat Night” (beyond loving poetry, and music-both together and separately) was that, as a musician I always loved collaborating with artists from other disciplines. Before I left NYC for Portsmouth I wrote music for theatre, dance, film, etc. In Portsmouth I found I was just playing music gigs.  With New England’s rich tradition of great poets it was a kind of natural thought for a person like me to end up collaborating with poets.
I came up with the name “Beat Night” not just as a reference to the Beats (our modern knee-jerk response to poetry/music), but as a reference to the word “beat” just as a musical element hopefully implying that there will be music with poetry of all types. By the way, it was my friend David Amram who first started doing improvised jazz with the “Beat” poets in the 1950’s and is the model for what many of us still think of today when musicians improvise with spoken word artists!
My band “Groove Bacteria” provided the music for “Beat Night” and I was the host. Since I left Portsmouth about eight years ago there have been various hosts. The current host who has held the position brilliantly for quite some time now is the poet Mike Nelson.  My former band, in a slightly altered form, still provides the music and is now called “The Beat Night Band".
We recorded a cd in 2000, called "Beat Nights at the Electric Cave."  The Electric Cave was the name of the recording studio.  Below are 2 tracks from that cd as well as a third track we recorded at the studio on a separate occasion with the amazing poet Young Dawkins, who was the slam champion of Scotland and now lives in Tasmania.  We had planned on making a full cd with Young but it was never completed.   The "Electric Cave" cd is pretty much sold out but I have a couple still available on this site,  Go to "The Store" section.
I hope you also enjoy the many photos and copies of old posters that are in the Beat Night/Jazzmouth "Gallery"
Below are two vintage posters from the earliest days of Beat Night.
More on the Gallery Page (From the archives of poet John-Michael Albert) 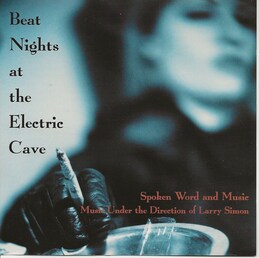 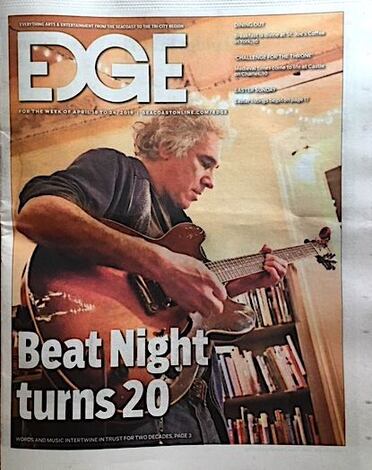 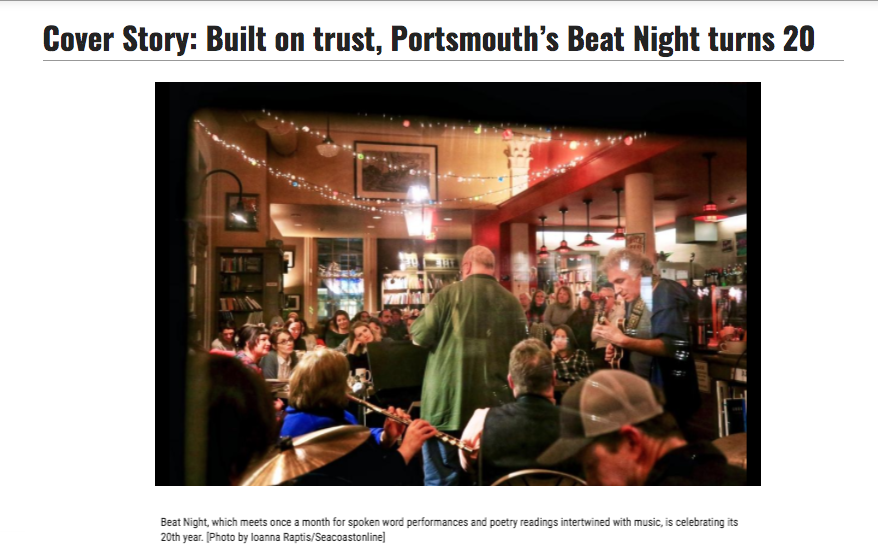 The Jazzmouth Festival
Jazzmouth, the Seacoast Poetry and Jazz festival, existed from 2005-2012 in Downtown Portsmouth New Hampshire. It was created by Larry Simon who was the artistic director. After 2012 Jazzmouth still existed for a few years in a smaller form.
Artists who appeared over the years included Ray Manzarek, Michael McClure, Mose Allison, David Amram, Bob Dorough, Sheila Jordan, Eric Mingus, Ed Sanders, Anrdre Codrescu, and former U.S. Poet Laureates Billy Collins, Donald Hall, Charles Simic (Pulitzer winner) and Robert Pinsky. David Amram was with us virtually every year.
Jazzmouth was a four-day festival celebrating poetry and jazz and the connections between them. It was an exciting, all-inclusive  festival, with events ranging from films to workshops, from musical performances to poetry readings, as well as events for young writers and musicians and even readings for toddlers. All taking place at a series of venues within a few blocks of each other in the heart of Portsmouth's historic downtown. Jazzmouth featured local artists as well as national acts.
I’m hoping to bring the festival back in the near future.
The Jazzmouth Festival always had a close relationship with all the area media, in particular the Portsmouth Herald and a very fine arts and news periodical called "The Wire". For a few years the issue of "The Wire" that came out during festival week came with a free CD featuring that year's featured performers. Below are pictures of two of those cd's.
Jazzmouth 2005 CD
Jazzmouth 2006 cd
Every year the festival ended with a joyful, marathon, music/poetry brunch at "The Library Restaurant" on State Street, in Portsmouth.  In 2009 two of our guests were Ray Manzarek (of the Doors) and Beat poet Michael McClure . They often worked together.  They came to the brunch only planning on enjoying the food and listening to the music and poetry. But they got caught up in the spirit of the occasion and did a fantastic impromptu performance that I was lucky enough to record.  The track is below. You'll hear Ray throw in quite a few very familiar licks from his days with The Doors. Please do not duplicate this rare recording.
Ray Manzarek and Michael McClure. Live at "The Library Restaurant" Jazzmouth brunch, 2009.
Below is one of many articles that came out over the years about the Jazzmouth festival.  This one was by Chris Hislop from The Portsmouth Herald, in 2009.

The week of Jazzmouth Festival includes events throughout the Portsmouth community known to draw people from near and far. These events include a workshop, readings, events for children and youth, films, brunches, readings, music and others. Jazzmouth celebrates spoken word and music as a literary festival. It is unique because local musicians and performers share the stage with national and international stars.
What: The “Main Event”
When: Saturday, April 24, 8 p.m.: Jazzmouth Presents: Robert Pinsky, Michael McClure, Ray Manzarek and Special Guests. Additionally, the show will feature the Larry Simon Ensemble, led by guitarist and Jazzmouth founder, Larry Simon with special guests, along with some of the Seacoast area’s favorite spoken word artists.
Tickets: $32 & $26 in advance; $35 & $28 day of; students (with ID) $2 off