Larry Simon
I started performing my compositions in downtown NYC in the late 1970's.  Most of my early performances were for electric guitar duets in a "minimalist" style, incorportaing aspects of rock, jazz, blues and aspects of Lamonte's Young's aesthetic.  Three of these duets appear in Larry Polansky;s book "New Music for Plucked Strings" (Frog Peak Music). During these years, aside from my guitar duo pieces, I also worked with artists such as John Zorn, Richard Peck (Philip Glass Ensemble) Dan Goode, Gamelan Son of Lion, Jay Clayton, Jody Harris (The Contortions) and many others. During the 1980's I was a member of Lamonte's Ensemble. Some of these compositions were written for film, dance or theatre.
Guitar works.
The duets, are usually meant for electric guitar but perfectly OK to play on acoustic. The first one below is my earliest, from 1978, "Jed Stern Ascends to Heaven."  This particular recording , from 1992 is a four track recording. I overdubbed both parts and added percussion and a guitar solo- not part of the actual composition.
"Jed Stern Ascends to Heaven" ©Larry Simon
The next three duets, also overdubbed, both parts played by myself, are form the early 1980's.  All three scores appear in Larry Polansky's anthology "New Music for Plucked Strings" Frog Peak Music 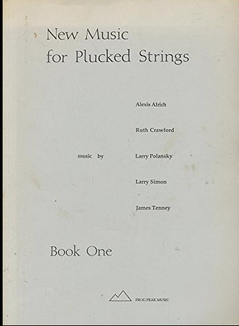 "Major Rathbone's Safari"  ©Larry Simon
"Darkness at Tiffany's"  ©Larry Simon
"Breakfast at Noon"  ©Larry Simon
This duet "You're the Expert on Monkeys" is a later duet, from 2012
Here is a multi-track piece from 1992, It incorporates some phase elements, surf elements, the name of my yet-to-be born daughter Nell, and, I even sing! The title doesn't mean anything- it just came to me. "Theresa in the Land of Virgins"
Theatre works
​The first one below was for a production of The Golem, staged around 1988.
I remember that composer/percussionist Dave Simons was a member of the live ensemble, but this piece was for calliope, or, as heard  below, a digital equivalent. The following "The Golem's Lyrical Dance" accompanied a clumsy dance for the Golem.
"The Golem's Lyrical Dance"  © Larry Simon
The following piano piece is from my theatre work based on the life of billionaire/inventor Howard Hughes. The piano piece, as  well as the name of the theatre piece is "Mr. Billions Tango". I wrote it for my graduate thesis at Mills College in 1983 but it ended up being produced for 2 seasons at a small off Broadway theatre in Soho, NYC, called "Inroads" on Mercer St.
"Mr. Billion's Tango"  © Larry Simon