Larry Simon
This portion of the site is devoted to my recording "The Dream Keeper." It features the poetry of Langston Hughes accompanied by music.  The recording is an outgrowth of the "Jazzmouth Poetry and Music Festival" that I directed for eight years in Portsmouth, NH. Composer/performer David Amram was a guest at the festival for just about every year and Eric Mingus (son of Charles Mingus) was also a guest a number of times. Hughes is my favorite poet and having both Amram and Mingus together at the festival made the session virtually a foregone conclusion.  Amram had collaborated with Langston and Eric had the family heritage through his dad's work with Mr. Hughes. Two tracks from the cd are below. The cd is available from the Store section of this website, also directly from the label  Mode/Avant, as well as all the usual places (Amazon, etc.) 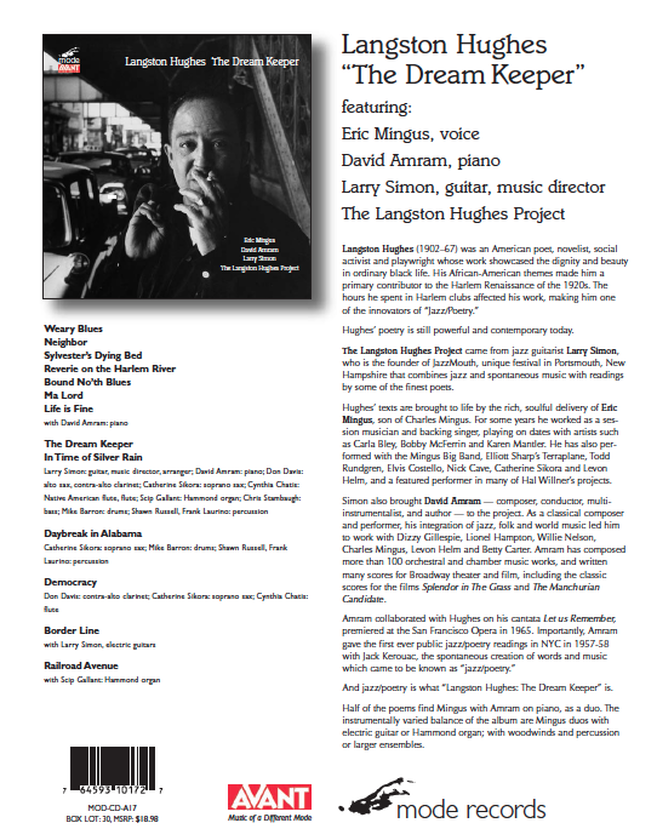 The poetry in this extraordinary recording is as relevant today as it was when Langston Hughes first wrote it. Spoken by the brilliant Eric Mingus, son of Charles Mingus. The musical accompaniment by the legendary David Amram and Larry Simon with his band Groove Bacteria and other fine musicians add to the angst, despair and hope that make this recording an important contribution to the legacy of Langston Hughes.
​
David Amram has composed more than 100 orchestral and chamber music works, written many scores for Broadway theater and film, including the classic scores for the films Splendor in The Grass and The Manchurian Candidate; two operas, including the groundbreaking Holocaust opera The Final Ingredient; and the score for the landmark 1959 documentary Pull My Daisy, narrated by novelist Jack Kerouac.  He is also the author of three books, Vibrations, an autobiography, Offbeat: Collaborating With Kerouac, a memoir, and Upbeat: Nine Lives of a Musical Cat published in the fall of 2007 by Paradigm Publishers.

Amram's recent orchestral works include Giants of the Night, (commissioned and premiered by flutist Sir James Galway in 2002); Symphonic Variations on a Song by Woody Guthrie, (commissioned by the Woody Guthrie Foundation in 2007); and Three Songs: A Concerto for Piano and Orchestra (written for and premiered by pianist John Namkamatsu in 2009).  He was also chosen as the 2008 Democratic National Convention's "Composer In Residence For Public Events."  In 2012 Amram is working on a new orchestral piece and new book.  He will also be the subject of a new documentary film about his life, which will include a filming and recording of his 1968 comic opera 12th Night and several of his other works..

Eric Mingus is an acclaimed composer, performer, recording artist and poet, who has performed with Elliott Sharp, Hubert Sumlin, Carla Bley, Todd Rundgren, Elvis Costello, Nick Cave, Karen Mantler, Steven Bernstein, Catherine Sikora, Levon Helm and many more, including being a featured performer in many of Hal Willner’s projects. Eric’s compositions range from blues and rock songs to haunting instrumental melodies and jazz inspired arrangements, and this extraordinarily broad range of styles is always clearly defined by his unique aesthetic sensibility. He has written scores for three documentaries, and has composed almost all of the music for his albums and contributed songs to many more projects.

"The Dream Keeper"
​The Poetry of Langston Hughes, with music