Larry Simon
WELCOME.  I am currently adding more and more rare pics, tracks and info to my brand new site. Please check back regularly. The site currently has some very cool stuff but by the time it is complete ( late spring, early summer 2020), it will feature a cornucopia of  material, starting in the late 1970's, of NYC Blues, downtown NY new music, punk/funk, jazz and ending up with brand new music.
​Enjoy. Peace and Love- Larry 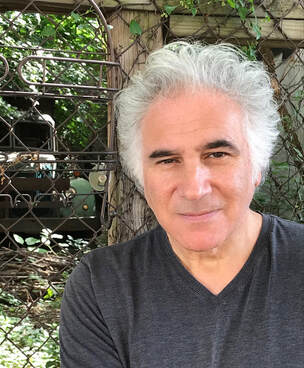 ​​Larry Simon, guitarist and composer from Brooklyn, New York, has recorded and toured with jazz and blues artists including; Big Jay McNeely, George Coleman, The Skatalites, David Amram, Bob Gaddy, Larry Dale, Jimmy Spruill and many others. As a composer he has written extensively for dance, film, and theatre. Additionally, Simon has worked for many years collaborating with poets, including Robert Pinsky, Ed Sanders and John Sinclair.
Larry also lived in Portsmouth New Hampshire for a number of years. While there he created the still ongoing "Beat Night" series, featuring music and spoken word. In 2004 he founded "Jazzmouth, The Seacoast poetry and Jazz Festival" of which he was the Artistic director and producer.
Starting in the late 1970’s Simon became very active in the downtown NYC experimental music scene, having composed and performed some of the earliest minimalist music for electric guitar. He was also a vital part of the “punk/funk” scene working with musicians such as Lester Bowie, Juilus Hemphill, David Sanborn, John Zorn, Henry Threadgill, and Phillip Wilson in seminal NYC clubs such as CBGB’s, Hurrahs, The Lone Star Café, and Tier 3. Simon was a member of composer Lamonte Young’s ensemble as well as Gamelan Son of Lion.
Larry's upcoming book, "NYC Portraits in Blues" (edited by John Broven) will be published in 2021 by the University Press of Mississippi. He has also  written for The Millennium Film Journal, Ear Magazine, The Portsmouth Herald, and Spotlight Magazine. His most recent recording is “The Dream Keeper” (With David Amram and Eric Mingus). It features the poetry of Langston Hughes, with music.